Hoglund Ballpark and the Anschutz Pavilion provide a wealth of facilities to allow for a full schedule of camp activities, rain or shine. 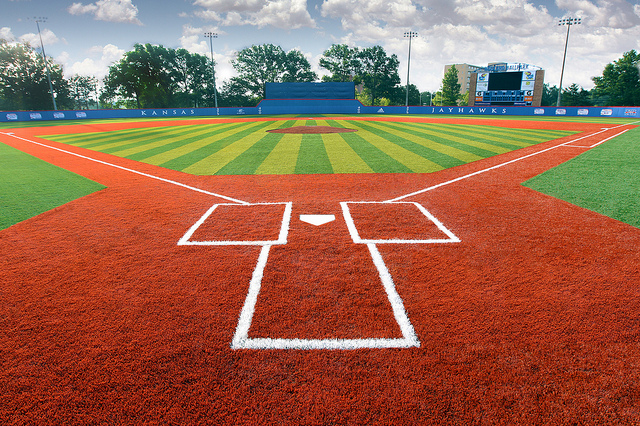 Hoglund Ballpark will enter its 25th season as the home of the Jayhawk baseball program in 2012 and continues to undergo improvements to ensure it remains one of the finest college baseball facilities in the Midwest. The park is named after former Jayhawk Forrest Hoglund, who played at Kansas from 1955-56.

During the summer of 2010, the Jayhawks overhauled the grass playing field in favor of AstroTurf USA’s 3D playing surface. The entire field is covered in turf, with a different color and grade on the basepaths, at home plate and on the warning track. The pitcher’s mound is the only area with real dirt.

The $1.2 million project was funded entirely through private donations to the baseball program, in an effort which began prior to the 2009 season.  KU also made minor modifications during the off-season, adding a state-of-the-art sound system as well as safety screens around the entire seating area.

In 2009, the Jayhawks made the addition of a clubhouse on the first base side of the field. The 6,500-square foot clubhouse features a locker room area, a lounge for the student-athletes as well as a game day patio for fans.

The season was also a banner year for the Jayhawks as “The Hog” saw some of the best baseball in KU history. The Jayhawks won 25 games at home in 2009, including a three-game sweep of No. 1 Texas in March. KU also swept a series from No. 17 Oklahoma State and drew a record 2,639 fans to the regular season finale win over No. 11 Kansas State.

Recently, the Jayhawks have added a state-of-the-art video board and also made improvements with new lights and a new backstop netting. The video board, which measures 16 feet-by-28 feet, rivals any in the country.

The Hoglund Indoor Hitting Facility, which was completed in 2006, features three 75-foot full-length batting cages and three portable pitching mounds. The all turf facility is 105 feet long by 54 feet wide and is heated and air conditioned for year-round use.

In recent seasons, the foul lines were brought in 20 feet to make new dimensions of 330-392-330, while both dugouts and the backstop were refurbished with brick. Additions at the conclusion of the 2003 season included turf walkways to the plate, as well as a turf ring that surrounds the home plate area.

Prior to the 2003 season, construction was completed on five new turf batting cages down the left field line, while a new home bullpen was constructed and a blacktop surface added to the right field bullpen area.

Before the 1999 season, $1.8 million in renovations were made in an effort to improve Hoglund Ballpark. Seating capacity was increased, a new pressbox was built, dugouts were expanded, additional men’s and women’s restrooms were added and a plaza entrance is now featured. A gift from Forrest Hoglund primarily funded the renovations.

Kansas City International Airport is 60 miles to the northeast and is served by most national airline carriers. As you exit the airport, turn left onto I-29 North. Continue on I-29 for several miles to I-435 South. Continue on I-435 South to the junction of I-70 West. Take I-70 West to Lawrence. Exit I-70 at exit #202 (West Lawrence). Follow Iowa Street to 19th Street, turn left on 19th Street, to Naismith Drive, turn left on Naismith Drive, leading to Fieldhouse Drive, South of Allen Fieldhouse. Allow one and a half hour driving time from KCI to Lawrence.

From the west (Forbes Field):

Forbes Field is located in Topeka, Kansas, approximately 30 miles west of Lawrence. Travel on Highway 75 North to I-70 East to the West Lawrence Kansas Turnpike exit #202, which will lead to Iowa Street. Follow Iowa Street to 19th Street, turn left on 19th Street, to Naismith Drive, turn left on Naismith Drive, leading to Fieldhouse Drive, South of Allen Fieldhouse. Allow one and a half hour driving time from KCI to Lawrence.