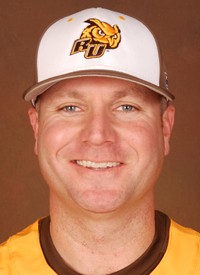 Mike Dickson is in his second season as head baseball coach at Rowan University.

In his first year, the Profs went 25-14 and earned a spot in the New Jersey Athletic Conference (NJAC) Championship Tournament. Casey Grimes was chosen the NJAC Co-Player of the Year, the Eastern College Athletic Conference (ECAC) Metro Player of the Year and to the D3baseball.com All-America and American Baseball Coaches Association (ABCA)/Rawlings Mid-Atlantic All-Region first teams.

Dickson returned to the University after spending nine seasons as the head coach at Rowan College at Gloucester County (RCGC) (formerly Gloucester County College). He graduated from Rowan in 2002 after a successful career on the diamond as a player and then an assistant coach.

Dickson led the Roadrunners to a 360-88 record and two National Junior College Athletic Association (NJCAA) Division III Championships (2010 and 2013). After guiding RCGC to a 49-3 record and its seventh national title in 2013, he received the Skip Bertman National Coach of the Year Award, an honor that encompasses all levels of college baseball.

Dickson arrived at RCGC after coaching stints at the University of Pennsylvania and Rowan. While at Rowan, he helped guide the Profs to a 96-32 mark. The Profs won two NJAC Championships and advanced to the NCAA Division III World Series in 2004. Dickson was the assistant camp director for Rowan’s baseball clinics.

Dickson has been a health and physical education teacher at Brookfield Elementary School in Camden, Assistant Director at the Sports Central Hitting Academy in Bellmawr and an instructor at various baseball camps along the east coast.

Dickson graduated with a bachelor’s degree in education with a specialization in health and physical education. He earned his master’s from the University in 2005 in higher education administration and received the Medallion Award for academic excellence.

Ryan Kulik is in his second season as an assistant coach for the Rowan University baseball team. He oversees the Profs’ pitching staff.

Kulik was a standout pitcher for Rowan from 2005-08. He was a two-time team captain and set six school records: strikeouts in a game (15), season (144) and career (337), strikeouts per nine innings (13.67), innings pitched in a career (330) and most games started in a career (49). Kulik was twice named the New Jersey Athletic Conference (NJAC) Pitcher of the Year and was an All-Conference first team selection. He received New Jersey Collegiate Baseball Association (NJCBA) All-State honors three times and was chosen to the Eastern College Athletic Conference (ECAC) Metro All-Star Team twice. Kulik earned American Baseball Coaches Association (ABCA) Mid-Atlantic All-Region recognition in 2006 and 2008.

During his senior season, Kulik was selected the NJAC Male Athlete of the Year, NJCBA Division II/III Pitcher of the Year, ECAC Metro Player of the Year and garnered ABCA All-America first team and D3baseball.com All-America third team distinction. In addition to these honors, he led the nation in total strikeouts (144) and strikeouts per nine innings (13.67).

Following his career in Glassboro, Kulik was selected by the St. Louis Cardinals in the eighth round (245th overall) of the 2008 Major League Baseball Draft and continued to play professionally for seven years. He reached as high as Triple-A with both the St. Louis Cardinals and Colorado Rockies, while also being named the Texas League Pitcher of the Week in 2010.

Kulik graduated from Rowan with a bachelor’s degree in health and exercise science. Kulik is a product of Cherokee High School where he earned All-State and All-South Jersey honors. He also held the school record for most strikeouts in a game (17).

Kulik is currently playing in the Atlantic League of Professional Baseball with the Camden Riversharks.

Pat Fisher is in his first season as an assistant coach for the Rowan University baseball team.

Fisher joins the staff after nine seasons coaching at Paul VI and Camden Catholic High Schools. He led the Eagles to two Olympic Conference titles and reached the South Jersey Non-Public A final in 2011.

This is Mike Rucci’s first season as a volunteer assistant coach with the Rowan University baseball team.

Prior to joining the Rowan staff, Rucci was the head baseball coach at Gloucester Catholic High School for three seasons (2013-2015).  He guided the Rams to two appearances in the State Championship and one South Jersey final.  Rucci compiled over 100 wins in his five seasons.  He also coached baseball at West Deptford High School from 2011-12 and led the team to its first-ever South Jersey Championship.

At Rowan, Rucci received a bachelor’s degree in elementary education and special education.  He is currently a fifth grade teacher at Alice Costello Elementary School in Brooklawn.  Rucci resides in Williamstown with his wife Brianna and children, Hailey and Michael.