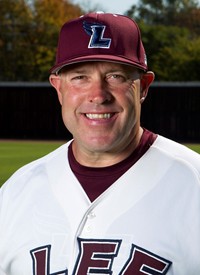 One of the most successful college coaches in the state of Tennessee, coach Mark Brew begins his 16th season as head coach of the Flames. He directed his first seven Lee teams to the NAIA College World Series before leading the transition to NCAA Division II and the Gulf South Conference in 2014. The 2021 season saw the Flames post a record of 36-11 and 26-6 in GSC play. Lee finished the season ranked No. 12 and was ranked as high as No. 2 during the season. The Flames captured the GSC regular-season title.

Coach Brew also took his Flames to the NCAA DII South Regional Tournament where they were defeated by a University of Tampa team that claimed the South Regional Championship. Logan Workman was a standout the entire season and was drafted in the seventh round by the Tampa Bay Rays.

Workman and Ryan Beamish earned ABCA All-American honors. Workman also was selected to the NCBWA All-American team. The Flames rewarded Brew with his 600th coaching win on April 17, 2021, defeating West Alabama. His overall coaching record stands at 610-231-2. Brew was named the South Region and Gulf South Conference Coach of the Year in 2021.

The 2018 season saw the Flames finish seventh in the regular season to earn the program's second berth to the GSC Tournament. The team recorded a 2-1 record in pool play and advanced to the championship game, where it fell by a 7-6 score to No. 4-seed Mississippi College.

The 2015 team posted a 39-19-1 overall record and 17-13-1 in league play. After a successful regular season, the Flames went on to host and win the NCCAA Mid-East Region Tournament for the second straight season and advance to the World Series in Mason, Ohio. Lee would secure a second consecutive second-place finish after falling to Fresno Pacific in the national championship game.

Prior to joining the NCAA Division II ranks Lee dominated the NAIA landscape finishing second in the World Series in 2008 and 2010, third in 2009, 2012 and 2013 and fourth in 2011. In 2013 the Flames posted another impressive record of 51-12 while having a record five players taken in the Major League Baseball Draft and two others ink free agent contracts.

Over Brew’s tenure as Head Coach and Assistant Coach the Flames have had 32 players get drafted/sign MLB contracts, including two that have played in the Major Leagues (Lance Zawadzki and Brandon Cunniff).  Additionally, 38 players have signed contracts with Independent Professional teams in Brew’s tenure.

Prior to taking over the Flames' program, Brew served as Lee's chief assistant under former head coach David Altopp for 10 years. During his playing days, Brew had a successful four-year career at Trevecca Nazarene University under Coach Altopp. In 1990, Brew was the top hitter for the Trevecca baseball team. He was also the closer for the Trojans for four years. In 1993, he posted a 4-0 record, had four saves, and a 1.80 earned run average. He was an NAIA Scholar-Athlete while at Trevecca and was named the University's Outstanding Christian Athlete during his senior year.

A 1994 graduate of Trevecca, Brew received a B.S. degree in Physical Education and was an employee of the Nashville City School system before joining the Lee staff. In 2006, Brew added to his educational portfolio by earning a Master of Sports Science degree in Sports Management from the United States Sports Academy in Daphne, Ala.

A native of Smyrna, Tennessee, Brew and his wife Rachel have been married for 27 years. They are blessed with two children, Elise, and Alex.

Go to Top of Page    |    Thank you – and if you have any questions please contact the coordinator shown on each event's information page.
Copyright © 1993-2023 Ready, Set -- REGISTER