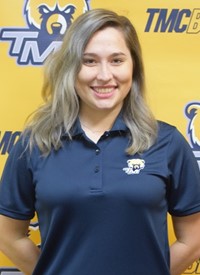 The Truett McConnell College Athletic Department is proud to announce the immediate hiring of Rachel Evans as the new Women’s Lacrosse Coach. Evans joins Truett McConnell after serving as the Director of Coaches for Copperhead’s Elite Travel teams in Newnan, Georgia.
“Rachel possesses a wealth of lacrosse playing and coaching experience,” said Truett McConnell Athletic Director, Stacy Hall. Hall went on to express his enthusiasm and expectations for the latest addition to the Bears’ Athletic Department stating, “She also is passionate about sharing the gospel with others. We are delighted to add her to our team and have every bit of confidence that she will help build our team into a championship caliber program.”
Although this is Evan's first collegiate coaching position, she has several years of coaching elite lacrosse players at both the middle and high school levels. Evans has worked in some capacity with Copperhead Elite Lacrosse since the summer of 2012 when she first began as an Assistant Coach on the Copperhead’s Elite Travel Team consisting of high school aged athletes. In 2013, she took over as Head Coach for the Copperheads’s Elite Travel Team and went on to be named Director of Coaches for Copperhead Lacrosse in 2014.
In addition to her coaching experience, Evans has played lacrosse since her middle school years and was a standout player during her four years at Newnan High School in Newnan, Georgia. After graduating high school in 2010, Evans enrolled at Shorter College in Rome, Georgia where she received a bachelor’s degree in History with a minor in Political Science in 2014.
While enrolled at Shorter, Evans quickly became a pivotal piece of their Women’s Lacrosse program. She was named to the All Conference 2nd Team in the National Women’s Lacrosse League (NWLL) during her freshman year at Shorter and received the honor of being voted team captain during her sophomore season. During her junior year at Shorter College, the college underwent a transition in the athletic department moving from the NAIA to NCAA D-II. Despite the stiffer competition, Evans continued to excel on the field, again earning the honor of team captain and being named to the NWLL All-South Region 1st Team.
Evans is a proud member of New Hope Baptist Church in Newnan, Georgia and is the daughter of Pastor and Mrs. G. Rhodes Skinner. She has served on numerous mission trips around the world including in Moldova and most recently in Italy. Evans has also served as a counselor for Western Baptist Associations Children’s Camp in Rockbridge, Georgia for adolescents since 2009.
Evans expressed her pleasure about joining the Truett McConnell team, stating, “Truett McConnell is unique even among Christian Colleges in that it requires certain criteria for enrollment. Everyone at Truett McConnell meets that criteria which makes for a wonderful Christian learning environment.”