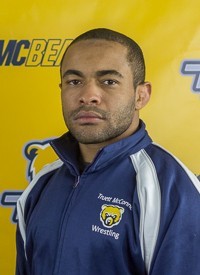 Former assistant wrestling coach at Cumberland University in Lebanon, Tenn., Cobbs coached 13 National qualifiers, and six All-Americans. In 2013, his team finished fifth in the country for academics with a team GPA of 3.29 and second in 2014. He also helped lead his team to a sixth place finish in the 2014 NAIA national tournament.

The Chicago, Ill., native previously coached at Concordia University in Seward, Neb., serving as a graduate assistant for one semester before being named interim head coach for the second semester. At Concordia, Cobbs coached eight NAIA national qualifiers, three All-Americans and one NAIA Scholar-Athlete.

While at Concordia his coaching responsibilities included extending support to the head coach in training athletes and teaching the basics of wrestling, responding to athlete queries and needs and correcting mistakes to improve performance, supervising practice and analyzing strengths and weaknesses to formulate match strategies, and informing athletes about match regulations and safety measures.

He also trained the student-athletes on the basics of Greco-Roman, Freestyle and Folkstyle wrestling, observed practice sessions and suggested suitable category and form per fitness levels and key wrestling skills, monitored the correct use of techniques and proficiency of match strategies, and ensured strict adherence to safety measures, regulations and protocols for matches.

Cobbs also served as a volunteer coach at Lifeline for Team Powerhouse in Des Moines, Iowa, for three years and was the head coach of the OFC Twisters in Oskaloosa, Iowa, for one year. He was a four-year camp clinician at Richmond-Burton Community High School in Richmond, Ill., from 2005-08 and served two years as a camp clinician at Glenbard East High School in Lombard, Ill.

Cobbs began his collegiate career at Loras College in Dubuque, Iowa, earning a trip to the NCAA Division III National Championships as a freshman. He then transferred to William Rainey Harper Community College in Palatine, Ill, garnering All-America honors and placing fourth at the national tournament in his one season at WRHCC.

Cobbs spent one season at William Penn University in Oskaloosa, Iowa, qualifying for the NAIA National Tournament for the Statesmen. He received his bachelor’s in Physical Education/Strength and Conditioning from William Penn in May 2011 and is currently finishing up a master’s in Sport and Exercise Pedagogy/Sports Management at Cumberland.

Cobbs is married to wife, Jennifer and has three children: Jackson (6), Jacobi (5), and Marli (1).  He currently resides in Cleveland Ga.