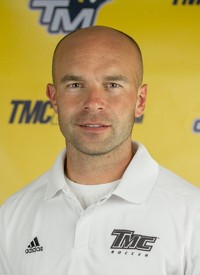 McDowell attended Bob Jones University in Greenville, S.C. and graduated with a Bachelor’s degree in Psychology. He continued his education at Columbia International University in Columbia, S.C. where he received his Master’s degree in Theology.

After college, McDowell played for FC Kandern, a semi-professional soccer team in Germany, in 1999-2000. McDowell brings experience and knowledge to the Bears soccer program. He currently holds a USSF ‘D’ coaching license, and a NSCAA ‘National Diploma.’

McDowell has several years of coaching experience at both the collegiate and high school level. Prior to TMC, he spent one year as an assistant soccer coach at White County High School in Cleveland, Ga. McDowell coached for Borwall Soccer Academy during the summers from 2004-2010 and the youth soccer club in Clarkesville, Ga. in 2007.  McDowell transitioned into the role as TMC’s assistant men and women’s soccer coach in 2004. In 2006, McDowell was made head coach over both teams. It wasn’t until 2012 that McDowell solidified his role as the women’s head coach.

The Lady Bears have been very successful, on the field and in the community, under McDowell’s leadership. In 2011, the Lady Bears made it to the NCCAA National tournament, finishing 7th in the nation. The 2012 season proved to flourish as the young team finished with a 9-10 record, despite competing in a difficult conference. The Lady Bears finished seven out of 13 schools in the SSAC Conference playoffs. The girls made great strides within the conference, bringing home wins against Spring Hill, Belhaven, Southern Wesleyan, and Brewton Parker. The team also qualified to compete in the NCCAA regional playoffs.

The Lady Bears also garnered recognition within the community as they gave over 600 hours of community service during the spring semester alone.

McDowell coaches with a “Family first, team second,” motto. “This is the essence to TMC’s athletic program,” McDowell said. “My hope is that my team will understand that while our goal is to be successful on the field, and we strive to win every game, we must do it as a family. This motto overlaps every other area – whether community service, accountability, academics – if we are willing to sacrifice for each other and grow cohesively as a collective unit in Christ, I believe we will be successful in all areas.”

McDowell’s goal for the 2013 season is to win the AAC title. While challenging, with 16 returners and a good freshman group coming into the program, the team feels they have a good chance to reach this goal, McDowell said.

Developing players, at the skill and spiritual level, is McDowell’s favorite aspect of coaching. “Seeing the team develop and improve as soccer players is rewarding,” he said. “But watching God work in their hearts as they strive to work on their relationship with Him is the best part of all.” 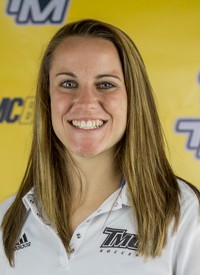 Swinson led the Lady Bears to their first ever NCCAA National Tournament appearance in 2011; she also made the NCCAA and the SSAC’s First-Team that year.

After graduation in 2012, Swinson aspired to play professional soccer. Although she had the opportunity to compete overseas, she felt called by the Lord to stay at her Alma Mater.

Swinson was born and raised in Americus, Ga., and is the daughter of Warren and Kristy Swinson. She has one older sister named Hanah.