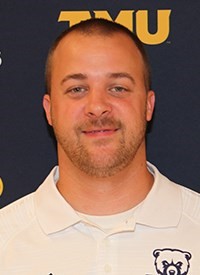 Corbin is entering into his second season as the head women’s volleyball coach. Corbin came to TMU with an ample amount of experience in coaching and education.

"I am excited and thankful for the opportunity to coach at Truett McConnell University," Corbin said. "I believe that God has great things in store for the volleyball program at TMU. With a good core of returning players and a very supportive athletic department, the goal is not only to see the volleyball team become more competitive and grow in the game of volleyball, but more importantly to see them grow in their love for Christ, their school, the community, and for one another.

I cannot wait to get started and work alongside such a great athletic staff and administration.  There is a lot of work to do to get where we want to be, but I believe this group of girls is excited and ready to work hard.  I believe God is at work and will allow this team to do great things both on and off the court for His glory."

Corbin spent a year as an assistant coach at Bob Jones University where he helped guide the Bruins to the program's first ever NCCAA DII National Championship. From 2006-2017, Corbin served as both a varsity girls’/boys’ volleyball head coach and teacher at a handful of different Christian and public schools. In addition, Corbin coached with Upward Stars Upstate, a club volleyball program in Spartanburg, SC, since 2015.

Corbin's experience in education administration took take place in Delaware, West Virginia, Florida and South Carolina, at various Christian, where he served as an athletic director, alongside teaching and coaching, for eight years running (2007-2014).

Corbin played collegiate men's volleyball at Northland International University (2002-2004) where he holds a Bachelor's of Science in Physical Education and Bible.

In his first year at TMU, Corbin led the Bears to its best season in team history.  The Bears finished with the best winning record in school history and went on to compete in the conference tournament where they upset the #2 seed and went on to finish 3rd in the tournament.