Croley arrived at Truett McConnell in 2012 after coaching at the Savannah College of Art and Design in Savannah, Ga. Croley brings an intense passion for baseball and the platform it offers for sharing the Gospel of Jesus Christ. The TMC Baseball program is focused on not only developing great student-athletes, but more importantly disciples for the Lord Jesus Christ. The program attempts to encourage and challenge each of its members, through small discipleship groups led by local pastors, church members, and coaches. The team also meets on a regular basis for team devotionals, and serves the local community in various ways. The 2014 Bears Baseball team won the AAC’s Champions of Character team award, and saw a substantial increase in wins from the previous season's record.

The 2015 Bears qualified for the conference tournament for the first time in school history. The Bears’ win totals have increased each of the last two seasons. The 2015 Bears also recorded victories against the sixth ranked Georgia Gwinnett Grizzlies, as well as NCAA DII opponents Southern Wesleyan University and Emmanuel College. The Bears also had two student-athletes earn All-Conference honors, with Chris Carden being selected to the First Team as an infielder and Luke Henderson making Second Team as a pitcher. The Bears also had six academic All-Conference selections and had a team GPA over 3.0.

Croley has served as a coach on both the collegiate and professional level throughout his career. While at SCAD, the team set a school record for fielding percentage and homeruns and reduced strikeouts by 20 percent from the previous year.

Croley also served as Assistant Coach at NCAA Division II Valdosta State University in Valdosta, Ga. during the 2008 and 2009 seasons. In 2009, the Blazers finished in second place in the Gulf South Tournament and earned a bid to the NCAA Division II National Tournament. The team compiled a 43-21 overall record and led all of NCAA Division II with 113 homeruns.

Working with the Valdosta State infielders in 2008, the Blazers committed just 45 errors in 1,080 chances. The squad set a new school record that season with a .968 fielding percentage.

Prior to coaching at Valdosta, Croley spent three seasons working as an Assistant Coach at Embry-Riddle University located in Daytona Beach, Fla. He served as a Hitting Instructor while also coaching the Eagles' infielders and outfielders at different times during his time in Daytona. During each of his three seasons at ERU, the team reached the NAIA World Series.

Croley's coaching experience includes serving as an Assistant Coach at Brevard Community College and working as the Infield Instructor and Third Base Coach for the Rockford Riverhawks of professional baseball's Frontier League.

As a player at Embry-Riddle (Fla.) during 2003, Croley helped lead the Eagles to the NAIA College World Series. He batted .336 and hit a team-high of eight homeruns while driving in 49 RBIs. He also amassed 57 runs scored with 19 doubles and five triples while totaling 78 hits. On the base paths, he stole a team-best 32 bases in just 37 attempts. His efforts that season led to an NAIA All-American title, and he also received All-NAIA Region XIV and All-Florida Sun Conference team honors.

Croley's collegiate career began at Brevard Community College where he earned JUCO All-American honors in 2001 while leading all Florida Junior College baseball with a .432 batting average. He hit eight homeruns, tallied 47 RBIs, and was named the conference's Player of the Year.

Croley earned his Bachelor's degree from Embry-Riddle in 2004 and a Master's degree in Exercise Science from Eastern Kentucky University in 2005. He and his wife, Erica, have a daughter, Anna Grace, and reside in Cleveland. 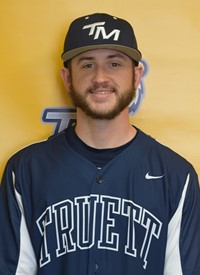 Ross Roberts enters his third season as the Assistant Coach/Pitching Coach at Truett McConnell, his alma mater, having helped the Bears to record breaking wins each year.

2017 - At the beginning of the season, all 27 conference starts were unaccounted for, setting the pitching staff up for quite the challenge. But for the second straight season, Roberts’ pitching staff broke the school record for Wins(33) and strikeouts(433), smashing 2016’s total, which included Jared Oliver, and Chris Stevens, as the Bears advanced to the NAIA Regional tournament in Montgomery Alabama for the first time in the program’s history. The 2017 Bear’s staff ranked 22nd in the Nation in total strikeouts. Roberts’ staff also set the single season program record for shutouts in a season(6).

The 2017 staff compiled an impressive series during the AAC tournament, qualifying for the NAIA regional tournament, using only 4 pitchers. The Bears turned out dominating performances by Senior - Chris Carden, Sophomore’s - Greg Elder and Caleb Jameson, as well as Freshman - Nick Hammonds.

Chris Carden, who signed with the Tampa Bay Rays, led the staff, setting numerous school records on both sides of the baseball, such as Career wins(15), Single season wins(9), Innings pitched(101.1), Complete Games in a season(8), and Career complete games(11). Offensively Carden also set the records for Hits in a season(84), Career Hits(253), Doubles in a season(19), Career doubles(62), RBI’s in a season(55), Career RBI’s(120), Total bases in a season(127), and Career total bases(369). Carden’s signing makes the Bears stand out as having 2 players sign professional contracts in as many years. Carden made the transition from the bullpen to a Starter with ease, going 9-2 with 8 complete games, One complete game shutout, striking out 106, and only walking 27.

Roberts’ developed All-Conference Sophomore Gregory Elder, as he also transitioned from the bullpen to the starting rotation, going 8-5 with 5 complete games, posting a 3.34 ERA, and setting a Bears single season record for strikeouts(117). Elder also posted an opponent batting average of .193, which was 6th best in the country.

2016 - Roberts’ first pitching staff, led by 26th Round draft Pick(Boston Red Sox), Jared Oliver, who was the 1st player drafted out the program since it became a 4 year school, led the Bears to a school record 29 wins, advancing to the AAC playoff for the 3rd consecutive year. Oliver posted an opponent batting average of .180, which ranked 6th in the country. He also ranked 3rd in the country in Hits allowed per 9 innings(5.18), as well as 8th in the country for total hits allowed(43). Oliver currently holds the career strikeout record, with 233. Roberts’ 2016 staff also broke the school record for Strikeouts(375), previously set by the 2012 pitching staff. Also contributing heavily to the 2016 staff’s success was senior Chris Stevens, who currently holds the records for Games started in a career(38), and Innings pitched in a career(274.1).

As a player, Roberts played his entire career(2010-2013) for the Bears in the Southern States Athletic Conference(SSAC) as a pitcher, outfielder, and first baseman. Roberts earned a Conference Gold Glove award for outfield(2011), as well as the Champion of Character award for the team(2011). Roberts also is tied for 3rd all time for doubles in a season(16).