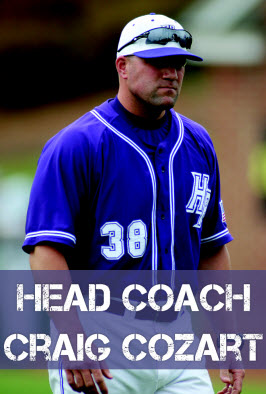 The 2014 season is head coach Craig Cozart’s seventh at the helm of the High Point University baseball team. Cozart has a reputation for recruiting and developing pitching staffs. He has had 30 pitchers drafted in the Major League Baseball draft under his guidance, including former Panther and current Cleveland Indian Cody Allen who was drafted in 2011.

Cozart was named High Point baseball’s fifth head coach in June 2008 and has led HPU to program records in wins and nearly every offensive category. He has helped guide the Panthers to their three-most winningest seasons in the program’s Div. I history and holds the HPU record for career conference wins. He needs just 11 wins to set the HPU Div. I career record for overall wins.

High Point won 29 games in 2013 and finished with a 15-9 record in conference play. The 15 Big South wins by the Panthers matched HPU’s Div. I single-season record and the 29 overall wins were the second most in a single season in High Point’s Div. I history.

HPU has won at least two games in the Big South Championship three times in five seasons under Cozart and in 2012 became the first No. 7 seed to advance to the Big South Semifinals since 2000. 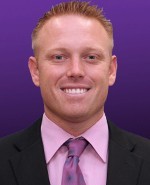 Smith began coaching at Bethune-Cookman after two seasons as a volunteer assistant coach at UNC Asheville, where he coached second baseman Jordan Lurie to All-Conference honors. While at Asheville, Smith oversaw the team’s weight lifting program and helped coach the team’s hitters and infield defense.

Smith was the 2007 Southern Conference Player-of-the-Year at Western Carolina. He hit a team-high 20 home runs and set Western Carolina single-season records in both RBI and Total Bases, earning him second team ABCA All-American honors. Smith led the Catamounts to the championship game of the Chapel Hill Regional and earned a spot on the NCAA All-Regional Team. He graduated from WCU with his Masters in Accountancy.

Smith began his collegiate career at UNC Wilmington where he played for three seasons before graduating with his degree in Accounting and transferring to Western Carolina. He helped lead the Seahawks to the 2006 Colonial Athletic Association title, hitting .286 with 16 doubles and 28 RBI. Smith played on two championship teams and was a part of two Regional appearances at UNCW.

Following his collegiate career, Smith was drafted in the 20th round of the 2007 Major League Baseball draft by the Texas Rangers. He played in the Rangers Minor League System for two seasons, first with the Clinton Lumberkings then with the Spokane Indians. 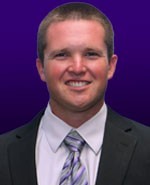 Patrick Long joined the High Point University baseball coaching staff in August of 2016. Long came to HPU from the University of Tennessee at Martin where he coached for two seasons.

Long served as the volunteer assistant at UT-Martin for the 2015 and 2016 seasons during which time he oversaw the instruction of the outfielders and hitters. He also assisted in the day-to-day operations of the team, including organizing and running individual group sessions, throwing batting practice, defensive positioning, practice planning and on-campus recruiting.

Prior to his time at Tennessee-Martin, Long worked for two seasons as an assistant coach with the Peninsula Pilots in the Coastal Plain League and he served as the Baseball Operations Manager with Tuckahoe Sports Inc. for one year.

Long played for seasons of collegiate baseball at Georgia Tech from 2007-2010 as an infielder and right-handed pitcher. He played in 150 games with 95 career starts and finished his collegiate career hitting .275 with 44 RBI and 80 runs scored. On the mound, Long appeared in 38 games and went 0-1 with a 3.18 ERA and 42 strikeouts in 34 innings pitched. 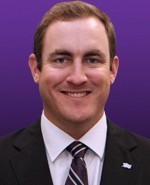 Laws worked for two seasons (2013-14) as the Director of Baseball Operations at the University of Virginia. His responsibilities with UVA included serving as the team's travel coordinator and also assisting with all aspects of game day operations and on-campus recruiting.

Prior to joining the Cavaliers, Laws was an assistant coach at Arkansas State for one season (2012). While at ASU he was in charge of the catchers, assisted with the hitters and fieldwork and served as camp coordinator.

Laws was an assistant coach at South Dakota State in 2010-11 while he earned his master's degree in Sport and Recreation Studies from SDSU. He also served as the head coach for the El Dorado Broadcos of the Jayhawk Summer League in 2011 and an assistant coach in 2010 with the San Diego Waves summer team, which qualified for the NBC World Series.

Laws graduated from Murray State in 2010. He was a First-Team All-Conference selection in 2009 after hitting .373 as the starting DH for the Racers. He moved into the starting catcher role as a senior and batted .314 with 14 doubles and four home runs.

Laws played the 2008 season at Palomar Junior College, where he was a Pacific Coast Conference Honorable Mention selection at catcher.