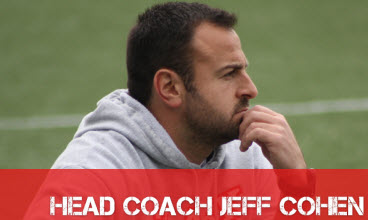 The all-time leader in wins in lacrosse history at Clark, Jeff Cohen returns for his seventh season on the Cougar sidelines in 2016. His 41 coaching victories are more than a third of the program's all-time wins which began back in 1989.

In 2015 as Cohen guided the Scarlet and White to a school-record tying eight victories and had a pair of first-team all-conference performers.

2014 proved to be the most successful in the 27-year history of the program as Cohen led the team to its most wins in a single season (8) and appeared in the first-ever postseason game in school history.

In his first four years, Cohen had already put together an impressive resume of accomplishments as he attempted to build his alma mater into a regional and nationally-recognized program.

Cohen has twice been named Pilgrim League Coach of the Year (2010, 2012) after leading Clark through the most successful stretch in program history.

In 2013, Cohen guided the Cougars to the program’s first-ever non-losing season and tied the then school record for wins in a single season (7) and had the Cougars in the hunt for a playoff berth on the final day of the regular season for the second consecutive season.

The 2012 campaign was a near-miss for Cohen and the upstart Cougars, who missed out on the playoffs but had three all-conference performers and one of the best offensive seasons in school history.

2011 saw Clark edged out of the playoffs on an obscure tiebreaker, but Cohen’s fingerprints were all over the program as he picked up his second Pilgrim League Coach of the Year award. He put together another six win campaign, highlighted by the program’s first win over Wheaton in more than a decade in double-overtime on the final day of the regular season.

In his first season at the helm of the Cougars, he resurrected the program as Clark went 6-8 overall - more wins than the previous two seasons combined. At one point, the Cougars won four straight games and were in the hunt for a shot at a Pilgrim League playoff berth.

Cohen was also selected to be an assistant coach at the 68th annual USILA/Lax World North/South Senior All-Star Game which took place during the NCAA Division I Men's Lacrosse Final Four weekend.

During his five four years, Cohen has had a knack for developing talent. Under his tutelage, the Cougars have received 12 all-conference selections by ten different players, including four first-team all-league honorees. That group of awardees doesn’t include Rob Holden, who was named the 2013 Pilgrim League Rookie of the Year.

Cohen arrived at Clark following a five-year stint as an assistant coach at Colgate University in Hamilton, N.Y. With the Red Raiders, Cohen helped lead them to a top ten national ranking and the program's first ever berth in the NCAA Tournament.

One of the all-time greats at Clark, Cohen was a two-year captain and finished his career with 133 points, good for fifth on the school's all-time list. He also ranks in the top ten in assists (3rd) and goals scored (9th).

He received a Merit Award in 2002, which is given annually to senior student-athletes who have made a significant impact on their sport and finished his career playing in the NEILA East/West All-Star game.

A 2002 Clark University graduate, Cohen holds a bachelor's degree in psychology with a minor in sociology.

Chris Johnson one of the program's all-time bests, returns for his fifth season on the Clark sidelines in 2016.

Johnson helped guide the Cougars to the best season in program history in 2014, as they advanced to their first-ever postseason appearance after winning a school-record eight games.

During his playing career, Johnson was one of the most feared scorers in the Pilgrim League as the Cougars top midfielder.

He ended his career with his name splattered all over the school record book, ranking fourth in goals (97), sixth in assists (48) and fourth in total points (145) - numbers that still stand today.

Incredibly consistent, Johnson scored at least one point in 53 of 56 contests and recorded 13 hat tricks in his career.

Johnson was a key cog during one of the winningest four-year stretches in program history. During his career, he helped the Cougars win 20 games – including 18 in his final three seasons under head coach Jeff Cohen. Among those victories was a thrilling 11-10 double overtime win over Wheaton College for the first time in program history to end the 2011 season.

A second-team all-star in 2011 as a junior, Johnson was named the first-team in 2012 when he finished fourth in the league in scoring with 48 points and handed out a career-best 21 assists.

He was a recipient of the athletic department's Merit Award after his standout senior campaign which is given annually to the student-athlete that makes a significant impact on their sport.

Johnson is a 2012 graduate with a degree in business management and a minor in entrepreneurship. 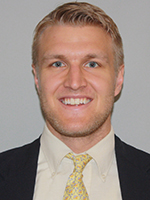 Former two-sport star, Kyle Klapp joined the lacrosse coaching staff in March 2014 and returns for his third season in 2016.

A 2011 Pilgrim League Academic All-Conference selection, Klapp served as team captain of the lacrosse team during that 2011 season where the Cougars missed out on the postseason on an obscure playoff tiebreaker.

During his time on the Clark soccer team, Klapp helped the Cougars to the 2008 NCAA Tournament and finished his time on the pitch with 42 games played and eight points (two goals, four assists) including the game-winning goal in overtime against Brandeis University on September 13, 2009.

A recipient of a Traina Scholarship upon his arrival at Clark in the fall of 2007, which is given to individuals who display exceptional academic performance and leadership, Klapp graduated with a bachelor's degree in psychology and a pre-med concentration.

A member of the Massachusetts chapter of the American Physical Therapy Association (APTA), Klapp did an Academic Practicum where he designed a manual entitled, "Promoting Exercise in Children with Autism Spectrum Disorder."

Michael Tobler enters his Fifth season as an assistant coach with the Clark University lacrosse program after joining in January of 2012.

In his role, Tobler works exclusively with the goalkeepers and the Clark defense. During his tenure he mentored Kevin Ranta '14, who graduated as the program's all-time leader in wins (18), third in saves (414) and fourth in goals against average (9.32) and in 2015 oversaw the development of first-team all-conference netminder Drew Riopelle-Tyrrell, who went on to lead the NCAA in save percentage.

A former goalkeeper at Denison University, Tobler was a member of the 1999 Big Red squad team that advanced to the Division III national semifinals, falling to the eventual champion, Salisbury.

In his three years on the Denison squad, the Big Red made three appearances in the NCAA Tournament and had a combined record of 30-12.

Tobler earned a degree in Cultural History at Denison in 2000.

His older brother, Scott, played midfield at Tufts University from 1992-96.

A native of Exton, Pa., Tobler currently resides in Leominster with his wife, Jocelyn.